Believing in environmental sustainability has become more and more universal in polite discourse, and the focus becomes how to get there. This raises the foreground question of what means should be used - technology, markets, regulation, consumer awakening, radical social change, are among the options - and assumes some clarity, which is itself not given, on the background question of what the actual goals and timeframes are.

But it seems clear that some progress in awareness and engagement has been made since the 1970s when the environmental issue broke into international attention.

What of environmentalists? I mean by this, what is the role for the people who have drove the tide of attention to this level of public and institutional agreement. It's more than just a historical question, to me at least. It's a question of the environmental sentiment, and whether this is something particular that needs to be retained, or even mainstreamed, as environmental sustainability continues as a shared preoccupation.

Right now, there is a growing backlash against environmentalists from an increasing number of sources.

Yes, Greta Thunberg has a point, but she is too moralistic and impractical: no-one is to blame, and we cannot do all that she asks.

Yes, climate change is a real problem, but the environmentalists are too dogmatic about nuclear power, we cannot achieve zero carbon energy on renewables alone.

Yes, resources are consumed at too fast a rate, but only markets have the power to drive efficiency, we cannot create a revolution in consumer behaviours through education.

Regular people, energy experts, investors, and many more are all, apparently, now onside with the need for change towards environmental sustainability, but take issue with the imprecision, flaws, emotionality of the environmentalists' messages and prescriptions.

Some of this is surely fair. I am an environmentalist, and have been for a long time. Even I have learnt - painfully - that to be the first to see a problem, even being the most specific to describe it, doesn't necessarily confer some or even any skill in prescribing an alternative. And, just as painfully, sometimes the best alternative to a bad environmental thing is not the end of it, or apparent opposite to it, its just less of it, or a different version of it. Environmentalists do have to grow up.

But there's more to the environmentalist message. There always was, and its as valuable now as it ever was, maybe more. That bit more is something about both goals and means, but also about reasons.

The environmentalist goal is not just to end depletion of natural resources and wanton destruction of living things and the natural world. And environmentalist means are not just whatever works to achieve these results.

The environmentalist sentiment is something about changing our - the human - relationship with the non-human realm of natural resources and living things and systems. In all the rush to solve the most crude, tangible problems of environmental damage, and in all the rise of willingness to engage, this root sentiment - the need for a changed relationship between humans and the environment - can get lost. I won't allow that.

Environmentalists are often not - perhaps mostly not - naive emotionalists. The precursor environmentalists, before the international breakout of environmentalism in the 1970s, were scientists: Aldo Leopold, Rachel Carson, René Dubos, Paul Ehrlich - even Henry Thoreau. But each them was touched, or maybe infected, by the a sentiment that, they themselves say, drove their outspokenness.

They themselves described this in various ways, but if there is something universal to their visions it is that the environment is something not just grander than human individuals, even the total sum of them. There's nothing anti-science about this - and science drives the insight further. Richard Feynman captured the aesthetic aspect of this.

First of all, the beauty that he sees is available to other people and to me too, I believe. Although I may not be quite as refined aesthetically as he is … I can appreciate the beauty of a flower. At the same time, I see much more about the flower than he sees. I could imagine the cells in there, the complicated actions inside, which also have a beauty. I mean it’s not just beauty at this dimension, at one centimeter; there’s also beauty at smaller dimensions, the inner structure, also the processes.

The environmentalist sentiment extends beyond the aesthetic wonder and maybe abstract beauty of physics, to wonder about the complexity and ultimately fragility of life.

This is because unlike physics, which continues no matter what happens, biology and ecology started at some point, and could end, in part or in whole, tragically sooner - or, if we are lucky or smart, much much later. If you feel something awe-inspiring about physics, do physics. If you feel something awe-inspiring about biology and ecology, protect life.

Natural fragility is complex and can be sentimentalized - because while individuals may die, even communities and whole species, ecosystems and life as whole may move on. But understanding resilience doesn't mean that reducing harm is undesirable or unnecessary. Just because you have a fire-extinguisher doesn't mean you should start fires, or even feel okay when fires keep happening by accident. Above all, it doesn't mean every fire can be put out: some damage to the environment and natural systems might kill all life, and if doesn't do that, it might make what remains a lot worse.

A powerful confusion in the environmental sustainability discourse is the difference between limits and limitability. What environmentalists have been seen to promote, and what policy-makers and in particular critics of environmentalism have heard, since the 1970s have been more or less specific limits on the fragility of natural environments and resource systems. The response to this has been, if any: those are not the limits, see, we went through that boundary, and nothing bad happened.

But the environmentalist sentiment about natural fragility is about limitability, not about any specific limit. It's about the desirability of limiting harm, both for its own sake - why should we destroy resources we could use later, or share with others, or living things that we could or should leave alone? - and for the purpose of risk management - well, there's definitely a cliff here somewhere in the dark, even if I haven't stepped off it yet.

Observing limitability of natural systems is not a complex point, and challenging it invites a reversal of the burden of proof. Who is really saying that natural systems cannot collapse, or be harmed to the point of depleted functioning? Who is saying non-human life has no ethical status, and which bits of nature can or should be dispensed with first? Proving limits may be hard, but proving the absence of limitability is much harder, and maybe should have been the emphasis all along.

One of the limits relating to the environment, that ironically arises most vividly around claims that environmental limits are unnecessary, and clarifies how near limitability is, is complexity. Co-ordinating human affairs, let alone natural systems, to achieve good outcomes is extremely complex, and increasing complexity reduces the likelihood of a good outcome.

So, if for no other reason than to make management easy, everyone should accept some kind of limit on our relationship with the natural environment: a limit on its complexity. Simple relationships in fact are less likely go to wrong in all circumstances: this is so universal it is the basic science behind entropy. If you make a flight cockpit with more controls than necessary, you increase the likelihood you'll press the wrong one by accident, or one will go wrong on its own, no matter how good at the flying the plane you actually are.

The environmental sentiment lands on the natural limits to the complexity of our relationship with the environmental in an intuitive way - by somehow setting value and quality on simplicity. At least that's how I experience it. It's not just some kind of aesthetic or ideology: simplicity can be just a default strategy for reducing risks from complexity.

To bring these reflections back to where they started, the central output of the environmental sentiment is the sensation and acknowledgement of the environment - in both its instrumental and ethical senses - as considerable, as worthy of and requiring consideration, not negligible, in the form in which it currently is, without transformation required.

The environment - whether a single insect, or biological community, or a regional ecosystem, or the abstract life-supporting biogeosystems will always be there, it will always be valuable and necessary, and it will always have a character and status of their own.

This holism, of seeing and feeling the considerability of the non-human world as it is, at least in part, has a profound side-effect: this environmental sentiment enables humans to see and feel the same considerability-as-is in themselves and each other.

But for now, I just want to raise it to prominence and distinguish it from public discourse around operative environmental sustainability. The result of recognising it, and perhaps cultivating it, include

What is the relevance of Buddhism in the modern world? What even is Buddhism? 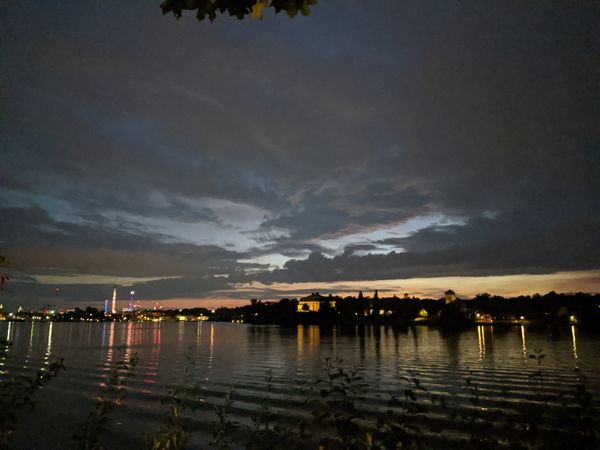 Running is more than health outputs. It's the experience and process also. Being fit enough to run long distance every day is like having a private cable car.